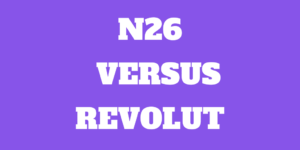 The two digital banking providers that have the most customers in Ireland are N26 and Revolut.
This is a review of the features and the pros and cons of Revolut Vs N26.
(Note:  Since March 24th 2022 , Revolut is now operating as a fully licenced bank in Ireland )

A Comparison of N26 Vs Revolut in Ireland (The Free Accounts)

N26 Bank first launched in Ireland in December 2015 and now has more than 7 million customers across  Europe and the USA, with at least 200,000 in Ireland.
N26 has a full European banking licence and funds are covered by the German Bank guarantee (up to €100,000).
The Central Bank of Ireland regulates N26 for the conduct of business rules in Ireland.

A bank account with N26 is in Euros and it has a bank account number and IBAN –  the same as any “mainstream” bank.
Customers can pay in their salary and set up Direct Debits. N26 customers can also pay money into N26 by bank transfer. Top up by debit card is also possible but there is a 3% charge – so it is best to avoid it.

You will need a smartphone to register and set up an N26 account. However, most of the N26 banking functions can also be carried out on laptops, tablets and PCs .

N26 , being branchless, does not deal with cash or cheques – (but how often do you need to do that these days?)

Joint accounts are not possible yet with N26 – but there are ways that couples can share an N26 card by using Google Pay or Apple Pay on separate phones (it works). (More about N26 and Joint Accounts )

The N26 app also allows cheap international money transfers in more than 30 currencies. (They use WISE).

You can also send money instantly to other N26 users from your phone without knowing their account details. N26 calls this feature “MoneyBeam“. You can send up to €1000 to other N26 customers within a 24-hour period.

N26 also has a feature called Spaces – which allows you to have sub-accounts for savings or separate spending pots. This is available on the “Smart Account” (€4.90 fee per month). You can get a free two month trial of 2 Spaces on the free Standard account.

Apple Pay and Google Pay are supported by N26.

N26 pays interest on savings in Germany – so that might be available in Ireland in the near future also.

You get a free virtual debit card which you can use with Apple Pay or Google Pay . If you also want a physical card, N26 will charge €10 for delivery. Many people can do without a physical card these days.

The €2 ATM fee does not apply to ATM withdrawals outside the Eurozone – but instead, there is a 1.7% fee on non-euro withdrawals. This 1.7% fee is lower than the “main” Irish banks – which all charge around  3.5% for non-euro cash withdrawals.

Unlike all the other Irish banks – there are no conversion or processing fees for using the N26 debit card to make purchases in currencies other than Euro. (See how much the other banks charge here)

The N26 Mastercard also has no fees for contactless payments.

You can sign up to N26 for free with a smartphone . You just need to fill in an online form and take a selfie and send a picture of your passport.  (Over 18s only) . You need to add some money to your account to activate it. The first top-up payment by debit card is free.

Revolut Vs N26 in Ireland:-
What are the differences?

Revolut has a HQ in the UK and has been running since July 2015. They have over 18 million users and about 1.5 million in Ireland.

Since March 24th 2022 , Revolut is now operating as a fully licenced bank in Ireland and funds of up to €100,000 are guaranteed by the Lithuanian State company Deposit and Investment Insurance.

With Revolut you get an EU IBAN as well as a UK GBP account.
Revolut can accept incoming payments in over 20 currencies.
Instant transfers between Revolut customers are also possible.

Revolut has no joining fee – but you will usually need to pay £4.99 or more for delivery of a physical debit card .

Special Offer for Money Guide Ireland readers.
If you join Revolut using the link below – you will get €10 credit on your account and a 1 month trial of Revolut Premium for FREE.

Using the Revolut debit card you can spend in another currency or exchange up to €1,000 in total every month without any foreign conversion fees.  (A 0.5% fee applies after the first €1000).

Only the first €200 of ATM withdrawals per month are free, after that, they charge a fee of 2% .
There are 5 free withdrawals a month. After 5 withdrawals a month, Revolut will charge you €1 each time. If you have also gone over the €200 limit – the charge will be the higher of 2% or €1 per withdrawal.

Direct Debits are also possible with Revolut  – and as with N26, they don’t cater for paying in cash or cheques.

Customers can access the Revolut app on a PC/laptop. You can view transactions and account balances , add money and Freeze or unfreeze your card .

Like N26 – a joint account is not possible with Revolut – but they will issue a spare card. The second card could be used by one half of a couple in the absence of a proper joint account.
However – you can link a Junior Revolut account to your main Revolut account (for 7 to 17 year olds). The Revolut app allows parents and guardians to manage and oversee all their child’s spending from one day to the next. Apple pay is now available on Revolut Junior.

With Revolut you can receive bank transfers directly into your Revolut account in a number of currencies: including- USD, GBP, EUR, AUD, NZD, JPY, MAD, CZK, QAR, THB, and ZAR. and more.

Which is better N26 or Revolut?

But  – there’s no harm in having both an N26 account and one with Revolut. Having spare cards and accounts with some money on them can be a useful if there are problems with one of them.

Revolut is much better than N26 if you need to receive payments in currencies other than Euro. (N26 won’t allow this).

For example – if you have an account with the online broker Etoro , they will allow deposits and withdrawals in USD from Revolut. This will save you from paying the 0.5% currency fee on Etoro.

Revolut says they use the Interbank exchange rates when you use their card for non-Euro purchases. But they will add a 1% markup to the exchange rate at weekends.

We did a small comparison of  USD/EUR rates, Interbank versus Mastercard, over a 2 week period in late 2017.

However it’s important to note that Revolut adds a 1% markup to the interbank rate at weekends on 14 major currencies and a 2% markup for all others. So this would make the Revolut exchange rate 0.75% worse than N26 at weekends.

Important Note:
With a Revolut standard account- if you convert more than €1000 in a month they will charge 0.5% fee. So N26 is definitely better if you are going to hit the €1000 limit in a month.

With Revolut – you do have the option of doing the currency conversion on a weekday, and then spending that currency at the weekend to avoid the extra markup (if you remember) . Or you could get both N26 and Revolut cards and use them wisely to reduce fees.

More details of Revolut Plans and Charges in Ireland.

If you are looking to make a large purchase (i.e over €5000 worth) outside Ireland  – i.e a car  – N26 or Revolut might not be the best options. The free versions of both cards have daily spending limits. N26 card has a daily spending limit of €5000 and Revolut’s limit is £5000 in 96 hours. Also – the Revolut free account will charge 0.5% currency conversion on the spending of over €1000. Although you could upgrade to Revolut Premium for a month to avoid this fee – but it will cost you €7.99

For larger purchases in other currencies – such as a car – you should consider the online currency exchange marketplace Currency Fair.
CurrencyFair is based in Dublin and regulated by the Central Bank of Ireland. You can transfer your Euros to CurrencyFair , convert it to any of 19 currencies and then transfer it out to the seller’s bank account.

Some Alternatives to N26 and Revolut

Monese is a UK based digital payment company that also gives people living in Ireland the ability to have a UK Sterling account, with an account number and sort code.
You also get a Euro account and a Mastercard debit card with no foreign transaction fees on the first €2000 a month spend.
Joint accounts are allowed with Monese.

Monese accounts are not full bank accounts – but their account numbers are treated like any normal bank account for receiving payments.
Cash top-ups are possible using Payzone at many shops in Ireland. (fees and limits apply)

Monese is currently available to anyone living in Ireland or anywhere else within the European Economic Area (EEA).

Read more about Monese here or go to the Monese Website.

It is not a full-blown banking app – so the features won’t be as good as Revolut or N26. There is NO monthly fee.

You get the interbank rate on currency conversions plus a fee that will depend on the currency.
For example : – EUR to GBP or USD or AUD was 0.41% ; EUR to PLN (Zloty) was 0.48% when we checked.

Other mobile banking apps that are currently only available in the UK and other EU countries include Monzo, Starling and Atom. Some of these may be available in Ireland in the future.
Monzo has a licence to operate in Ireland – but it looks like they currently have no plans to start offering services here in the near future.

Starling Bank has previously said they will be coming to Ireland – but it was revealed by Sky News on July 18th 2022 that Starling has withdrawn its application for an Irish banking licence.
on strategy.News has learnt that Starling Bank told its 2,000 employees on Monday that it had ended a four-year process aimed at launching a retail bank in Ireland.