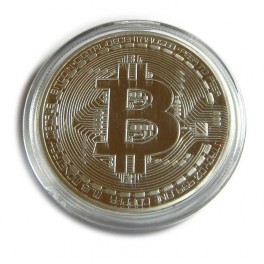 Bitcoin is a virtual currency which has been around since 2009 .  Unlike other currencies like Dollar and Euro, bitcoin does not exist in paper  or coin form . Bitcoin  made the headlines in  2017/2018  because of it’s sudden massive increase in value.

The price of Bitcoin hit a record high when it passed $19,850 in mid-December 2017 , but then tumbled rapidly, falling to below $12,000 within days.  Its value has shifted unpredictably ever since, with frequent wild drops and recoveries.

Bitcoin has bounced back above $10,000 recently   (Feb 2020) – possibly  fuelled by investors seeking a safe haven amid fears over the economic impact of the coronavirus.

Advocates of bitcoin said that it could eventually take over from “normal” currency .. that Bitcoin and the  blockchain technology behind it is the beginning of a huge societal change.
Sceptics said that Bitcoin is just a currency for drug dealers and murders that it is a bubble that will soon end up imploding.

(Of course more criminals probably use “real” money than the do Bitcoin – it’s easier to fake !

Investing in Bitcoin in Ireland

If you want a way to invest in the value of Bitcoin – but without actually owning any – you can  buy shares in a Bitcoin tracker from a stockbroker.
The cheapest way to do this is online with online stockbroker such as  DEGIRO.
There are ETNs (Exchange traded Notes)  that track Bitcoin called

All of these are classed as high risk investments with risk of loss . The comparatively low amount per share makes this type bitcoin investment more affordable for smaller, retail clients.

DEGIRO compared to other online stockbrokers in Ireland

This is a person to person trading site for Bitcoin. Started in 2012 and based in Finland. People in Ireland (and other countries) can exchange Euros for bitcoins. The site allows users to post adverts where they state the exchange rate and the payment methods for buying or selling bitcoins. You reply to these advertisements and agree to meet the person to buy bitcoins with cash, or trade directly using online banking. Bitcoins are placed in a LocalBitcoins.com web wallet from where you can pay your bitcoin purchases directly.  Users who create adverts are charged a 1% fee for every completed trade.

Coinbase is a site that Irish residents can use to exchange bitcoin or other digital currencies such as Ethereum or Litecoin. They were founded in June of 2012 and are based in San Francisco, California. A digital wallet is provided when you join up. There are fees for conversion that range from 1.49% to 3,99% .

2 thoughts on “Where to Buy Bitcoin in Ireland”