The official name for the new tax in Ireland  is the Sugar-Sweetened Drinks Tax (SSDT).

In Ireland ,  soft drink manufacturers are taxed according to the volume of sugar-sweetened beverages they produce or import.

Pure fruit and vegetable juices are not be taxed unless sugar is added.  Dairy products are not taxed either, nor are Soya, nut, cereal or seed based “milk substitute” drinks.
Alcoholic drinks or non-alcoholic beer and wine are not subject to the new sugar tax either.

If a retailer has purchased taxable product from a wholesaler based outside the ROI; The responsibility rests on the retailer to submit the paperwork and pay the tax to the government.

If companies take the right steps to make their drinks healthier they will pay less tax, or even nothing at all.
It seems that almost all the major soft drinks producers reformulated their drinks so that they fall outside the Sugar Tax. So it looks like the tax has already started to have the desired effect. Consumers in Ireland will probably not see many price increases at all because of the sugar tax

Coca Cola  did not change the sugar content of their “Classic” Coke – so there were price increases on this  because of tax.

There is more information about the tax for for producers or retailers on the Revenue website –  here.

The tax yield will potentially be decreased as drink makers reduce the sugar content and consumers opt for cheaper non-taxed products .

How Much is the Sugar Tax ?

Of course – VAT is added to this tax !

Smaller Sizes:
Coca Cola  introduced smaller sizes of their higher sugar  “Classic” version  –   and a  new 250ml slimline can and a 375ml  bottle instead of the 500ml. 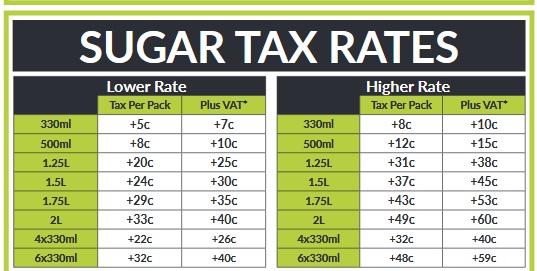 4 thoughts on “Sugar Tax in Ireland – Some Details”