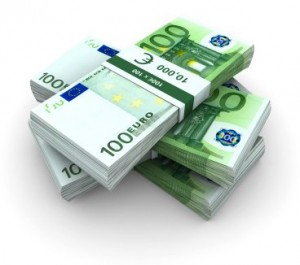 Online shopping continues to grow at a fast rate in
Irish consumers have done even more shopping online during the pandemic.
According to the Central Bank of Ireland, e-commerce accounted for 41.8% of total card spending in Q1 2020.
Total e-commerce expenditure amounted to €1.9 billion in March 2020, an increase of 11 per cent (or €185 million) from March 2019 . (This includes retail as well as online transactions such as utility bills , insurance etc)


According to recent UCD research – the total retail online spend by Irish shoppers was €5 billion in 2018 – with an estimated 60% (€3 billion) of that spent outside Ireland.

How Much Are The Banks Charging

Irish banks are charging their customers millions of Euro in foreign currency fees when shoppers use their debit or credit cards to purchase on non-Euro currency websites
We estimate those charges could total about €80 million in 2020.

A survey in 2018 on behalf of Paypal forecast that Irish consumers would spend €10 billion online in 2020. (These figures will probably be a lot bigger now because of the pandemic.)

We estimate that the majority of that 60% of Irish online spending that goes outside Ireland is spent on UK websites . A smaller proportion will be spent on USA and maybe Chinese and other EU sites. We estimate that 40% of all Irish online retail spending is going outside the Eurozone . (It could well be more than that ) .
So in 2020 – 40% of the forecast online spend of €10 billion works out at €4 billion being spent online outside the Eurozone .

When paying by a debit or credit card in a currency – the “main” Irish banks charge fees of around 2 That could work out at a total of €80 Million in charges over the year if no one does anything to avoid these charges.
Someone spending a €1000 Euro on UK websites could end up paying €20 in bank conversion fees.

How to Avoid Currency Charges when Shopping on UK or US websites .

N26 is one online bank that provides a debit card that has no foreign currency spending fees.

Bunq is another EU licenced bank that provides a Travel Card that has no foreign spending fees. Read our Review of the Bunq Travel Card

A prepaid debit card is also available in Ireland from Revolut that has no fees when spending in non Euro currencies.

Some people in Ireland may think they can avoid or reduce currency charges by paying in Euro on sites such as Amazon. But the exchange rate used by Amazon’s currency converter will end up costing you more than paying in Sterling.
An example from June 2019.
Order total on Amazon UK = £512.49 GBP
Amazon converted that to €598.63 Euro.
But if you opted to pay in Sterling – with an Euro Visa Debit card you would end up paying just €577.45. (Plus card fees) . Even with a 2% card fee it would cost just under €589 (a saving of over €9)

Using Paypal will work out more expensive than a debit card when it involves currency conversion. If you are buying in Sterling and have Sterling in your Paypal account – then using that to pay will be fine.
But if you need to convert Euro to Sterling etc. with Paypal you will typically get a worse rate than Visa or Mastercard
A Real example : (Using a Sterling balance on Paypal to buy in Euros)
A purchase costing £1587 Euros paid with Paypal Sterling balance ended up costing £1458 GBP .

If you want to avoid being one of the people that will collectively end up paying an estimated total €80 Million of card currency charges to banks in Ireland in 2020 – then you need to know – What is the cheapest way to pay online ?