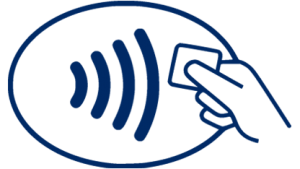 At the end of 2018, almost 4.6 million debit cards and 1.3 million credit cards in issue in Ireland had contactless payment functionality.  On average, debit cardholders in Ireland made almost 43 contactless payments per card in the second half of 2018 and spent more than €512 per card. Credit cardholders spent almost €117 using contactless on average per card in the same period
The quarterly value of contactless card payments exceeded €1 billion for the first time in Q2 2018 and almost one in three card payments were contactless.
Surprisingly –  cash withdrawn at ATMs on Irish debit cards rose to €9.4 billion in the first 6 months of 2018, an increase of  0.7% on the same period in 2017.

Contactless payment means you can pay for small purchases (€30 and under) in some retailers by holding your debit or credit card beside a keypad without having to enter your PIN.

For added security, you will be asked to enter your PIN after a certain number of uses.  There is a maximum value for these transactions, it started off at just €15. but the limit was raised to €30 from October 31st 2015. For amounts over this, you will always have to enter your PIN.

Most of the major retailers in Ireland now accept contactless payments

You can also use a contactless card to make payments outside Ireland.  One place where they are really handy is on the London underground and other public transport in London. All London buses and tubes accept contactless cards – you just swipe them at the ticket barriers (in and out) and the relevant charge is debited from your account in one transaction at the end of the day.    (You will also  incur the usual debit card charges for non Euro transactions.) More Tips For Visiting London here

Using contactless payment does have the advantage of paying without worrying about someone else seeing you tap in your pin.

The payment chip in the cards monitors all contactless payments made and if it detects several consecutive payments, it will ask the user to make a chip and PIN payment, to confirm it is still in the hands of the legitimate owner. Together with the €30 limit, this restricts the potential losses as a result of fraud (for which the cardholder would not be liable).

Apple Pay is another method of contactless payment. Read about Banks that have Apple Pay in Ireland

Google Pay is also available with many debit/credit cards in Ireland. See Which Banks Use Google Pay in Ireland

Bank of Ireland and Ulster do charge – but only 1c per transaction – but the others don’t currently apply a charge. AIB was going to start charging in Feb 2017 – but they changed their mind and are still waiving charges until further notice.

3 thoughts on “Contactless Payments in Ireland”