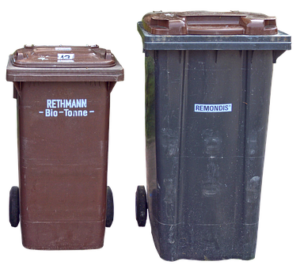 There are several companies offering household bin collections in Dublin. It’s not easy to find out which company has the lowest bin collection charges in Dublin  – because some of them don’t publish prices on their websites.

Some of the bin companies only serve certain areas of Dublin – so you might not actually have many choices in which company you select.

Thorntons have 2 options in Dublin.

City Bin have 3 options in Dublin

(Panda’s website does not seem to show any prices)

There is hardly any difference in pricing between the companies –  and as mentioned above, certain companies will only cover certain areas.

Most bin collection companies also offer pay as you go options which might work out cheaper for smaller households or those that recycle more.

There is a government website that is supposed to to keep track of bin charges – but the information shown on it isn’t great  because it doesn’t name the companies and it doesn’t give any figures for the weight thresholds.

A recent report in 2018 by the Competition and Consumer Protection Commission (CCPC) pointed out that competition from recycled and organic waste should bring down the revenues per kg per household. But – they found that the waste companies revenues are rising with the share of organic and recycling waste.
The report suggested that bin companies in Dublin are swapping customers so that they can each concentrate on certain areas to make collections easier for them.   But  – the resulting reduced collection costs for the companies are not being passed on to householders.

According to a survey by the AA – the average bin charge nationwide in 2017 was €304 a year – with charges ranging from €206 to €387 a year in various parts of the country.
Figures from the Competition and Consumer Protection Commission indicated that the average annual household charge for waste collection nationwide in 2016  was €228 .